We’ve all been there—after an exciting day bringing your new puppy home, you feed him and put him to bed in his crate and it starts. The whining. You try shushing him, putting a towel over the crate door, or providing a toy. He just went out, so why won’t he quiet down? He must be exhausted! If you’ve ever wondered why your puppy is whining so much, read on.

Whining alerts the mother dog that the puppy needs something.

First of all, know that whining is a normal form of communication for a puppy. Like any baby, they communicate with the tools at hand. Whining means something isn’t right in the puppy’s world and this method of communicating started the day he was born.

Whining alerts the mother dog that the puppy needs something – he could have been separated from his litter-mates (before their eyes open and before their motor skills are very developed) and gotten cold. Or it could be he’s hungry or needs to relieve himself. The mother dog responds quickly and appropriately to her whining puppy, and he quickly settles down again.

Once a puppy is old enough to go to a home of his own, he continues to use whining to let others know something’s not okay. And now it’s up to us to figure out why he’s not happy.

When puppies whine at night

Nine times out of 10, puppy whining is based on anxiety. She’s unhappy at being confined. She’s missing her litter-mates. It’s dark and she’s “alone” for the first time in her life. Puppies are less likely to whine, bark, or cry in distress if they sense your presence.

We know dogs are very social, and being isolated in another room is very upsetting to a new puppy. She’ll be much happier, and quieter, knowing you’re close. Puppies are less likely to whine, bark, or cry in distress if they sense your presence nearby. Keeping your puppy’s crate right next to your bed is helpful for the first few nights when she’ll be extra-worried about this big change in her little life. This way she can smell you and hear you.

How to soothe a whining puppy at night

When she whines at night, you can hang an arm over the side of the bed to let her sniff and lick your fingers. If she doesn’t settle down, and you know she doesn’t need to go to the bathroom, a rap on the crate to get her attention with a firm “no!” should do the trick. The main thing is to reassure her that she’s not alone.

An old trick that still works well is to wrap a ticking alarm clock in a towel for your puppy to sleep with. The noise is soothing and is said to remind the puppy of another dog’s heartbeat. 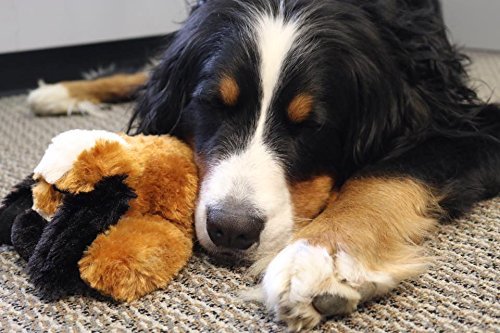 A high-tech version, and because many of us only have digital clocks these days, is a specially-designed toy for puppy snuggling. Such toys boast a ticking “heart” sound and can be warmed before use, which is especially nice for toy-breed puppies. Simply place in the crate at bedtime.

When puppies whine during the day

What if your puppy whines at other times of the day? First, remember that this is the only way he knows to communicate with you.

Is he trying to get your attention? Is he cold, or hot, or left alone too long? Is he bored? Is he full of energy and wanting to play? Does he need to go to the bathroom (or has he soiled his bed)? Is he uncomfortable or in some sort of pain (intestinal upset, for instance)?

Determining the cause of your puppy’s whining is important because you want to be sure he’s not in any physical discomfort. Training a puppy not to whine

If given the chance, your puppy will inadvertently “train you” if you reward him with attention every time he whines. There may come a time where you just have to tough it out. You want to avoid creating a whining dog that has you at his beck and call—or, whine—every time he cries.

It can be a fine line, of course, and it’s important to address his social, emotional, and physical needs first. If the whining is from boredom or loneliness, make sure you’re providing plenty of stimulation and playtime. Enlist a trusted pet sitter or dog walker to help and seek out opportunities like puppy playdates.

If you’re confident that your puppy’s needs are met, then gradually increase the time between your puppy whining and your response. Also, give your puppy what she wants (playtime, say, or food) when she’s not whining, so she doesn’t associate whining with rewards.

If you give a puppy attention (even negative attention) every time she whines, it will almost certainly increase her whining in the future.

Prevent whining with plenty of activity

Another trick to reducing puppy whining is to keep them occupied. Get in the habit of giving him a safe chew toy at bedtime, like a Nylabone for puppies or a KONG toy stuffed with puppy-friendly goodies for him to work on until he forgets his troubles. During the day, try fetch and chase games to wear him out. 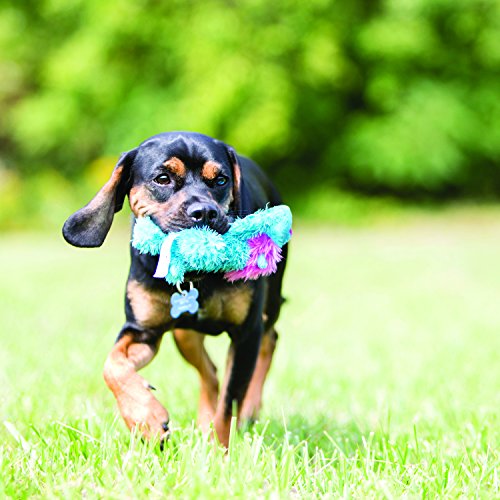 MARVIN THE MOOSE AND SIMILAR TOYS ARE GREAT FOR FETCH

Giving your new puppy plenty of attention, exercise, and toys to play with is part of the fun of raising your new best friend. As he learns the routine and understands he isn’t being abandoned, the whining will decrease and stop. A puppy obedience class as soon as he is old enough (after vaccine boosters) will help him to learn manners and gain confidence as he learns what is expected of him, and will deepen your bond.

And somewhere along the way, you’ll notice that he doesn’t whine anymore. Have fun!